Here’s how you can become an award-winning scriptwriter 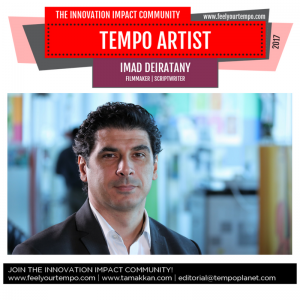 “I am a writer, film director and media specialist with more than 16 years of working experience with Abu Dhabi Media, the Abu Dhabi Film Festival and the Abu Dhabi government group of TV stations, radio, magazines and newspapers. I won the Black Pearl Award for my short film “Single Male” which was recognised in several film festivals. In 2010, I was appointed by Abu Dhabi Tourism and Culture Authority as Managing Director of the New York Film Academy in Abu Dhabi and received the “Best in Abu Dhabi” award for my achievements.  In 2016, I wrote and directed a short film “At a Traffic Light” about street children that was picked up by Qomrah 2 tv show and aired on MBC tv channel.  I have an MBA in film studies, and a bachelor degree and a certificate from UC Berkley and Harvard university, respectively.

“I started writing when I was a kid. Books were my world and they took me to places that will never exist even with all the technologies and social media that we have these days. I started writing mainly poems for my friends in university. I published a book on poetry in 2002. I felt that there were more stories in me and that needed different tools to tell them, so I started writing stories and learned filmmaking to turn these stories into film.

“Talent can’t succeed alone. It needs education and lots of work. Education will show you what others have done and will give you the tools to create. Education will help you sharpen your talent so you can stand out in a world full of competition.

“For me the main challenge to turn a script into film was not lack of funding! It was finding the right people to work with. I produced my last short film with zero budget because the team believed in me and in my story. Finding the right people to work with is the real challenge. Other challenges are finding a market for your film and the dearth of serious investors in the region. But if you have the will, you will always find the way.

“After the Abu Dhabi Film Festival closed down there were only nominal funding for small films that came from the Dubai Film Festival. In 2017, there were no serious film production companies except those focusing on commercials. However, there are institutions like the TwoFour54 that are focusing on building the media community in the region. There are limited opportunities in small production roles for commercial jobs.  For instance, I was involved with the Brad Pit film “War Machine” which involved a few production days but these big movies come ready with their crew and equipment. There were only a few logistics and administration roles available for the local market.

Disclaimer:  The thoughts and opinions expressed in the text belong solely to the author and not neccessarily to feelyourtempo.com

Reduce your risk of contracting coronavirus by following these tips

Are you doing this to hone your learning skills?