Never underestimate the walnut of a 4-year-old. Behind those innocent puppy-like eyes are wonders yet to be unveiled. Beneath their outlandishly mischievous selves lies a treasure-trove of wisdom for us, grown-ups, to learn. They’ll leave you awe-struck, EVERY SINGLE TIME, with their Bob the Builder inventions and their mini Einstein-ish discoveries. So, without further ado, here are 8 cool reasons why you NEED to think like a 4-year-old.

Hop on the magic school bus and join the cool ghost of 4-year old reality, Ms. Frizzle, as she takes us for a spin around the inside workings of a 4-year-old mind. *A few moments later* Ms. Frizzle sprinkles pixie dust all over Mr. Cerebrum and guess what, he starts talking!  Anyways, fast forward the gory details: he says that 4-year-old’s spend most of their time thinking about when their next playtime is or when their mommy will “bwing” them their favorite honey loops cereal. Going further up the “Aww” thought-scale, they even wonder which stuffed toy will kiss their boo-boo blues away. How adorable is that? Unlike us, they need not concern themselves with politics and other crap, because that’s a lot more confusing.

So, the next time you crave for some brain bliss, all you gotta do is get that 4-year-old swag on. Bada bing bada boom, you’re good to go.

2. Creativity is their Middle Name

Sure, they do make use of what scientifically-wired corporate Johnny Bravo’s boast about ALL OF THE TIME: logic, analysis and common sense. But hey, the essence of our 4-year-old dynamites is brought to the limelight, thanks to “creative thinking”. So, what triggers their creative neurons? Flashy colors and cartoons, duh!

Get them some Faber Castell color pencils and paints, and they’ll color away the grey scale hues that hover over our world. Show them cartoons and Disney movies, like Jungle Book, and they’ll recreate some of the best and most original “Baloo-Mowgli” moments you may have seen. Take them to a museum and show them skeletons of dinosaurs. When all we see are no-camera faced scary, gigantic and probably non-existent creatures, 4-year-olds see a whole new world of possibilities through their eyes. The theater is where they are.

In short, our little heroes are Walt Disney’s in the making. Are you blown away or what!

3. They Immerse Themselves in the Task at Hand

How? Well, guess what, “so you think you’re Dr. Seuss” person, they can spend 2 HOURS juggling between building blocks, puzzles & canvas paintings. For a 4-year-old, that’s some pretty, amazing multi-tasking skill. Jaw-dropping fact for peanut-sized concentration span goofballs like us, right? Sure, distractions might come their way but hey, they put their heart and soul into their kid tasks, no matter what.

So, what can we learn from our 4-year-old cuties? This might make you school goers, university students and office going peeps feel all jittery but, developing the “immerse yourself at work“ attitude is super important. Who knows, you might even get that promotion you’ve been storming the heavens for.

4. The ‘Don’t Give Up’ Attitude Runs In Their Veins

If they like something, prying it away from their hands is a task akin to breaking into the White House. Bribing and cunning tactics must be employed. Just kidding. If they want something, they’ll go against all kid odds and get it for themselves. No broken leg or plastered fingers will stop them from hitting the bulls-eye. If they need to get somewhere, they’ll crawl, walk, roll and/or run, even if it means falling several times. How amazing is that!

In the face of their little challenges, kids, that young, show so much resolve and perseverance. Likewise, if only we, adult peeps could (WO) MAN UP and get our act together, despite the soul-shattering moments life throws at us, only then can we lead a life that’s worth living.

So, here’s a tip; let your forever alive resilient 4-year-old be your guide, in the good and the bad.

They have no clue how to lie, like at all! “From the mouths of babes.” Heard of that quote? Simply put, it means that we can always count on children to tell the truth in any situation because, they suck at lying. From breaking your most-priced possession, to being mean, to then switching to the sweet-kid-next door, they’ll admit it all with a guilty look that’s so overloaded with cuteness that you won’t be able to resist.

Being truthful is a lesson they’ll pay for later on; afterwards, they learn how to lie and hide things, which should not be the case. So what’s the jackpot lesson here? Be as truthful as 4-year-olds because, even though the truth hurts, it’s still better than slipping a lie.

The kinds of things 4-year-olds come up with are astounding. Logic alone?? Boohoo. They soar to distant worlds and tell enchanting stories by the sheer power of their imagination. Missed a Backstreet boys concert? They’ll bring the roof down themselves with their artistic version of Backstreet boy melodies. Wanna build the tallest and the most iconic building you’ve ever seen? Run to a 4-year-architect. They’ll use the limited resources at hand and build you a roof touching Eiffel tower. If one plan backfires, they might sob for a while, but that won’t stop them from imagining new & innovative plan B’s, C’s, D’s and so on.

Too often do we stop and fear the logical outcome of our thoughts, rather than imagining what the best outcome could be and then persevering.

They are always fluctuating from one emotion to the next and they never seem to stop. But most importantly, they always show how they feel. Never underestimate the EIQ of a 4-year-old. They sense your pain and share your sorrows. They’ll cry with you and wipe your tears away. They can sense how happy and excited you are. They’ll celebrate you with giggles and wiggles, till the whole house joins the happy dance. However, snatch away their most loved stuffed bear and they’ll give you a piece of their mind. Yep, don’t fool around with them because they’re secret agents of The Boss Baby.

That being said, how often do we hide what we truly feel due to situations or the people around us? We shouldn’t have to feel scared or guilty of the way we feel. Being honest and true with our emotions is better for us and those we’re connected to, rather than presenting a false image of ourselves.

8. Discrimination Is Outta Their Dictionary.

4-year-olds are, without a doubt, people-lovers. It doesn’t really matter whether you’re red, brown, black or yellow skin-toned. They care two hoots about your freckles, acne or even the shreds of lettuce stuck between your pearly whites. They’re not looking for highly physical and/or intellectually appealing people. All they want is someone who likes them for who they are. Someone who’ll be their guest at tea parties or even a dummy doll for their experiments.

They love you for who you are- genuine love, that you’ll find if you look closely into their eyes. It’s the most beautiful feeling in the world. External factors have no bearing on what makes an individual likeable. It’s what on the inside that counts (and no, I don’t mean organs).

So, wanna be the nicest human being on the planet? If you do, then love-out-loud like a 4-year-old.

Loving out loud = NO DISCRIMINATION.

A shout out to my SERIOUSLY TALENTED  best bud, Anna Marie, for her creative inputs.

Tags: 4 year old, 8 Reasons why you NEED to think like a 4-year old, a 4 year old's mind, abu dhabi magazine, Be like 4 year olds, feel your tempo
Share this article: 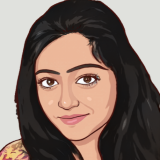 Sneha Maria
Sneha Maria Thomas is a 20-something Abu Dhabi based Indian who is an ardent logophile, a motivational speaker & a budding French language aficionado. She is a student pursuing a degree in French Literature at the University of Sorbonne, Abu Dhabi. Currently interning at her dream media firm, BrandMoxie which she says, has given her an exemplary opportunity to better channelize and hone her writing skills & creativity as well as develop an in-depth awareness about the many issues that our world confronts on an on going basis. She actively contributes in creating relevant creative content for BrandMoxie's Feel Your Tempo magazine.

Unknown Sneha fact: In 2016, she published a book of poems titled "A Ray of Hope," available on Amazon, iTunes & Barnes and Nobles and a host of other online platforms. Interested in tasting some of her poetic goodness? If yes, click the link below: https://allpoetry.com/snehamariathomas

As for future publications, Sneha is working her way through yet another chef-d'œuvre which narrates a true life story that is intended to awaken the world as its theme touches mankind in a subtle yet profound manner. To be published in less than a decade.
Previous Post