On Monday, March 13th, notable social media influencers Farrukh Naeem, Christina Magallon, EMKWAN, Freya Jaffar, and Gina Dillon met to discuss the role that social media can play in today’s business world. With the ever-growing popularity of social networks, the way we share information with our friends and the world around us has revolutionized over the past decade. This platform has the ability to connect with millions of real people at once, making it a powerful business tool if utilized correctly. These local influencers discussed how to build an audience, how to engage with them, keep them on-board, and refrain from losing popularity. They stressed the importance of human interaction and presenting one’s ideas in a way that doesn’t seem like another advertisement cluttering a person’s feed. With useful advice like dedicating one’s time to these social pursuits, and to consider hiring an individual with experience and a personal following, the discussion was one of great asset to any independent or small business looking to widen their scope of influence.

Ramadan Mubarak – The month of transformation

Family Events to Check out This March!

7 Things You Need To Know Before heading To Japan

Japan has a fascinating and multifaceted culture; it’s immersed in the deepest of traditions dating back thousands of years, however, it’s a society in a continual state of rapid change, with constantly shifting trends.  If you’re looking for something different you are sure to find it in Japan!

In Japan where the variations of toilets ranging from the Japanese squat toilet to Japanese high tech toilets can be quite confusing, however it is most certainly worth the experience. Now, in the photo you can see the Japanese toilet with bidet. There are bidets that come with a bottom-wash button, with variations of water jet strength, a rather curious ‘lady’ button (you’ll have to test that one out yourself) and then there’s the power deodorizer button. There is a translation of what each button does, but not all toilets have that… so the pictures do come in quite handy when you’re playing the guessing game. Also, don’t be surprised if you hear Waltz or a Mozart concerto or the gentle sound of a tickling waterfall while you are sitting on your throne. I admit, it is a rather clever way to cover up all the giggles that happen behind that closed door.

Wherever you go, there are vending machines: at the station, at school, on the super market toilet, in rural areas, inside of trains, on ferries, literally everywhere.  If you get thirsty in Japan you are almost never further than a few steps away from a vending machine. There are about 5.6 million vending machines in Japan. That means there is one for every 23 people!

Food models, known in Japan as sampuru( サンプル), or “sample,” this waxy, fake food has been around for nearly 100 years and, over time, has evolved beyond restaurant windows. Nowadays, you can get this fake food in any form you want: keychains, flash drives, cell phone charms, and even fake food iPhone cases. When you’re in a restaurant and don’t know Japanese, they are a lifesaver. With their exquisite detail, you know exactly what you’re going to get – what toppings on the ramen, what side dishes with the set meal – and if you really can’t communicate in any other way, all you need to do is point.

First time visitors notice them right away: Sickness masks. For years now, masks have been considered good manners. If you got sick, the polite thing to do was put on a mask so others, especially in crowded urban centers. They are also protection. If you don’t want to get sick, especially if you’re taking your kids to the doctor or if its flu season, then you wear a mask. During the spring, people with allergies often wear masks to help them through the season. But Japan’s sickness mask culture goes beyond that. Celebrities, for example, are often known to wear masks while out in public, enabling them to have regular lives and avoid being spotted. It’s also become a fashion statement. In Japan, many consider having a “small face” as a desirable feature and a large one less so. And thus, even though they do filter out bad air, the “just-for-show mask” caught on.

In Japan, people greet each other by bowing. A bow ranges from a small nod of the head to a deep bend at the waist. A deeper, longer bow indicates respect and conversely a small nod with the head is casual and informal. Bowing is also used to thank, apologize, make a request or ask someone a favor. Most Japanese do not expect foreigners to know proper bowing rules, and a nod of the head is usually sufficient. Shaking hands is uncommon, but exceptions are made. At shops and restaurants, customers are typically welcomed by the staff with the greeting “Irasshaimase”. No response is required from the customer.

Japan considers itself a service culture, and the Japanese pride themselves on a job well done without any extra gratuitous motivation. Employees are paid well and tipping is considered rude and offensive to both sides. There are some exceptions in some places, however they are rare

The Japanese view on cleanliness as a virtue is drilled in at an early age. Cleanliness is perhaps more important to the Japanese than with any other culture. The Japanese use the same word (kirei) for “clean” and “beautiful” and purification is an important element of all Shinto rituals. When they pray for something important they wash their bodies and dress in a white kimono. Sumo wrestlers throw salt to purify the ring and Japanese taxi drivers wear white gloves to indicate the immaculate state of their taxi. When schoolboys want to hurl out the worst insult they can think of, they call someone a “bacteria.”

Note: This article is a repost

If you’ve lived in the UAE for some time, you’ve probably seen trucks loaded with camels drive past you at some point. Although their main function in the past used to be transportation, in the recent years, camels have found themselves a new occupation – racing. Here are some fun facts about the camel races in the UAE.

Dubai, United Arab Emirates:  In celebration of the highly anticipated ‘Birds of Prey’ release, Reel Cinemas is hosting an exciting carnival-themed pop-up at The Dubai Mall (floor 2, Concourse 1) from January 30 to February 8, 2020.

To bring the latest DC Comics film to life, Reel Cinemas has several activations for ‘Birds of Prey’ fans to enjoy. The ‘Test Your Strength’ attraction is for those who want to find out where they rank on a scale of strong-to-scrawny by swinging Harley Quinn’s trademark mallet. Prizes include goodie bags, plush toys and tickets to attend the star-studded premiere taking place at Reel Cinemas, The Dubai Mall.

Other experiences include ‘Harley’s Salon’ in collaboration with Smashbox Cosmetics offers visitors the chance to try the newly launched Birds of Prey lipstick shades. Fans can also capture their most ‘Quinn-tessentially’ Harley pose in the UV backlight photo booth and create a HD video to share across social media channels.

The ‘Birds of Prey’ activation will be located on Second Floor, Concourse One, adjacent to the lift lobby, The Dubai Mall from January 30 until February 8. 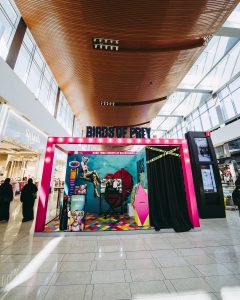 A Warner Bros. Production, ‘Birds of Prey’ premiered at Reel Cinemas, The Dubai Mall on February 3, 2020. The film follows the story of iconic DC Comics villain, Harley Quinn (Margot Robbie), after her tumultuous break up with The Joker. Birds of Prey is a twisted tale told by Harley herself, as only Harley can tell it.  When Gotham’s most nefariously narcissistic villain, Roman Sionis, and his zealous right-hand, Zsasz, put a target on a young girl named Cass, the city is turned upside down looking for her.  Harley, Huntress, Black Canary and Renee Montoya’s paths collide, and the unlikely foursome have no choice but to team up to take Roman down.

To book a ticket or view show timings for Birds of Prey visit:  https://www.reelcinemas.ae/

One Good Thing – A Story of Giving.

12 UAE SNACKS THAT TAKE US RIGHT BACK TO OUR CHILDHOOD